The time of year arrived again and it was time to point the nose of the aircraft due south, way down south to Tierra del Fuego. As usual we arrived in Buenos Aires on New Years eve, and the party we had in Puerto Madeiro is hosted exclusively for us and booked in advance. What a great way of starting a New Year for all the Global family.

When we arrived in Rio Grande on the 2nd of January we found the river much higher than the year before, but its clear, and that will help in the search of the big, silver Sea trout. After a fantastic lunch we are all ready for the first days outing of our 10 days in Rio Grande. The tackle set up this time was to be a sinking tip at level T14-17 and the intruder flies are doing well, even if some fish are still caught on smaller nymphs fished deep. The river is running faster than last year and some of the pools that weren’t productive last year are now working well; Ken had 7 in an evening session on Confluenza.

Laurence and Phil are soon cracking the code and catching big, nice fish. Phil with a 21 and 24 lber is again making his mark. Lars and Frede are starting strongly too, and Lars lands a nice 20lber on his single hand rod; this is not the last on the trip for him. Gerhard and Donny are starting more sedately than last year, but in the end both are doing very well and getting personal records with many nice fish landed.

Tam Black from Glasgow Angling Centre, as a first timer – is doing really quite well under Anita’s excellent coaching; they had a great time together. I can tell after watching all the smiles as i filmed them for the video we produced they both got a lot out of the trip. Ken and Nigel are full of enthusiasm as sergeants and did well as expected. Ken, together with Phil, are top rods for the trip with 31 fish each, Nigel is not far behind though. The two most dedicated anglers Nic and Stuart seems to be at the wrong place at the wrong time almost every day, fish are caught above and below them, but dead slow at times on their beats, thats fishing Nic said, after being top rod last year with 51 fish… But they both ended up with some decent fish in the end.

We were all thinking about Per who had to stay home due to illness two days before daparture, but its only 11 months left till we head back. The food and service in the lodge was awesome this year, and the special barbeque at the Estancia was a great event. As is normal when we are away, we had fun! Many ”straffe ones” were bravely borne, and bottle after bottle of excellent Argentinian Malbec wine were enjoyed in the lodge. The guides are fantastic as always, the motivation they give us during the fishing days was supreme. Thanks to the hosts Alessandro and Filipe for having us, and to Lisa for hosting another fantastic trip.
Psst! The moment we all had watching the big Condor hanging 10 yards outside the window of the lodge will stay in our memory for ever…

We arrived in Anchorage after a long flight from Europe, but the two days stopover was a wise thing to do. Visiting fantastic tackle shops and restaurants in the city of Anchorage was a nice way of kick starting the trip. New flies for a new type of fishing was important for all of us. The place was buzzing with excitement and anticipation

The flight from Anchorage to Bethel took 90 minutes and when we disembarked from the plane we headed across the tarmac to the smaller aeroplanes that were waiting for us. After a short 25 minute flight we arrived in Quinhagak. The guides were waiting with the bus where we left for the river, and after a 20 min boat ride up the river we arrived in the comfortable camp. We were allocated comfortable 2 bedded tents with wooden floors and and heater if required. Every day the tents were cleaned and the beds was made up whilst we fished. The camp serve some fantastic locally sourced food for breakfast and dinner; the lunch we make ourself and bring in a cooler on the boat.

The Kanektok River is made for flyfishing. The guides are provided with aluminium boats with water jet engines to transport us around safely and efficiently up and down the river system. The guides have extensive knowledge of the river and are very skilled flyfishers. They tell us what to use and how to present our flies to our quarry, whether Kings, Chum, Dolly and Rainbow Trout. These make up the bulk of the fish we catch, but some Pinks and Silver are also a possibility during the week. We had 400 hookups of Kings, with a 42lber, the biggest landed by the talented Yves. Chum salmon; there must have been way over 1000, even great sport on dryfly, biggest 16lbs. Some great sport for Rainbow with a dry mouse fly was something everyone had to try; awesome action. We will be back, year after year, what a great place, staff and camp, thanks all. Looking forward to amazing sport when we return.

The first group had a fantastic week, but it started windy with tough conditions on the flats. But the 2 last days gave us some trilling moments were Nic, Morten and me landed some big Tarpons between 120-130lbs. Anita and Peter had also great sport with Tarpons and Jack hitting the flies.

The seccond group got some tough conditions to cope with nearly all week. Paul and Phil was doing well chasing Groupers and Cudas, but for the rest of us we had a hard time on the flats. Nils got his first Tarpon ever and Gisle and me was hooking them but lost 10-15 to the boat. Morten and Atle had action too, but the wind was what keept us back every day. Great bunch tho, and most of the time we was fishing for Bones and Jacks wading the flats on the white sand. 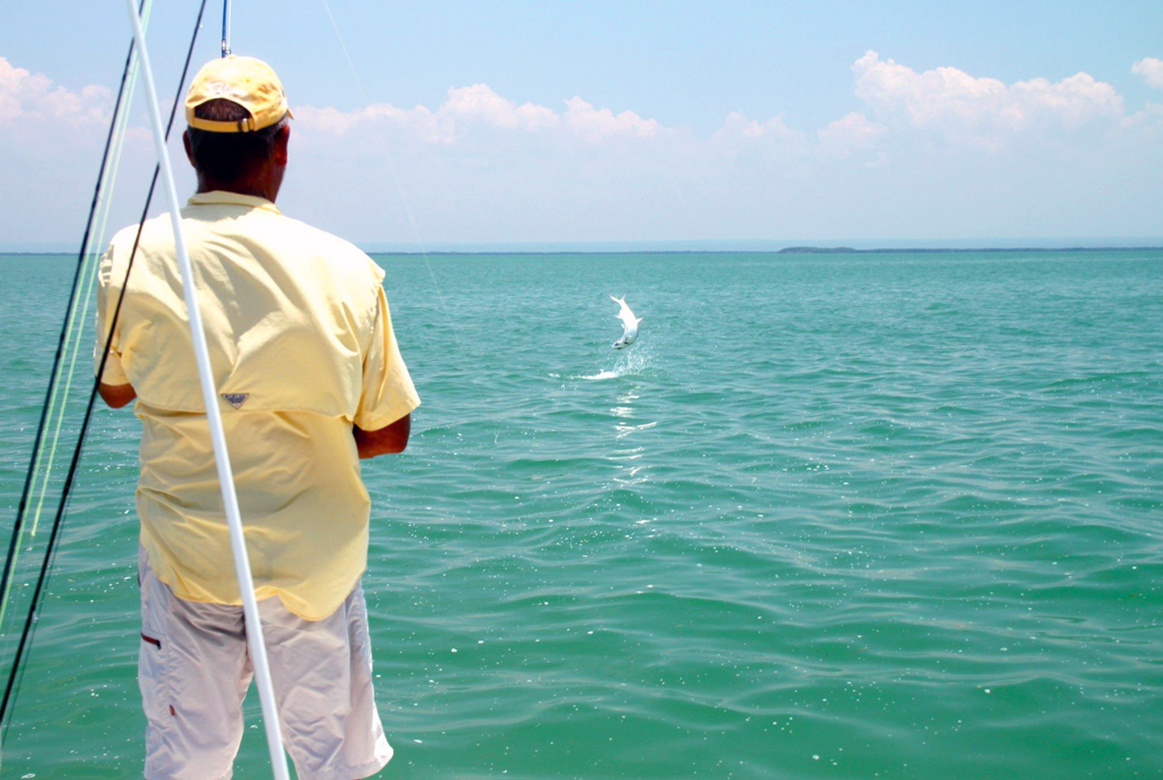 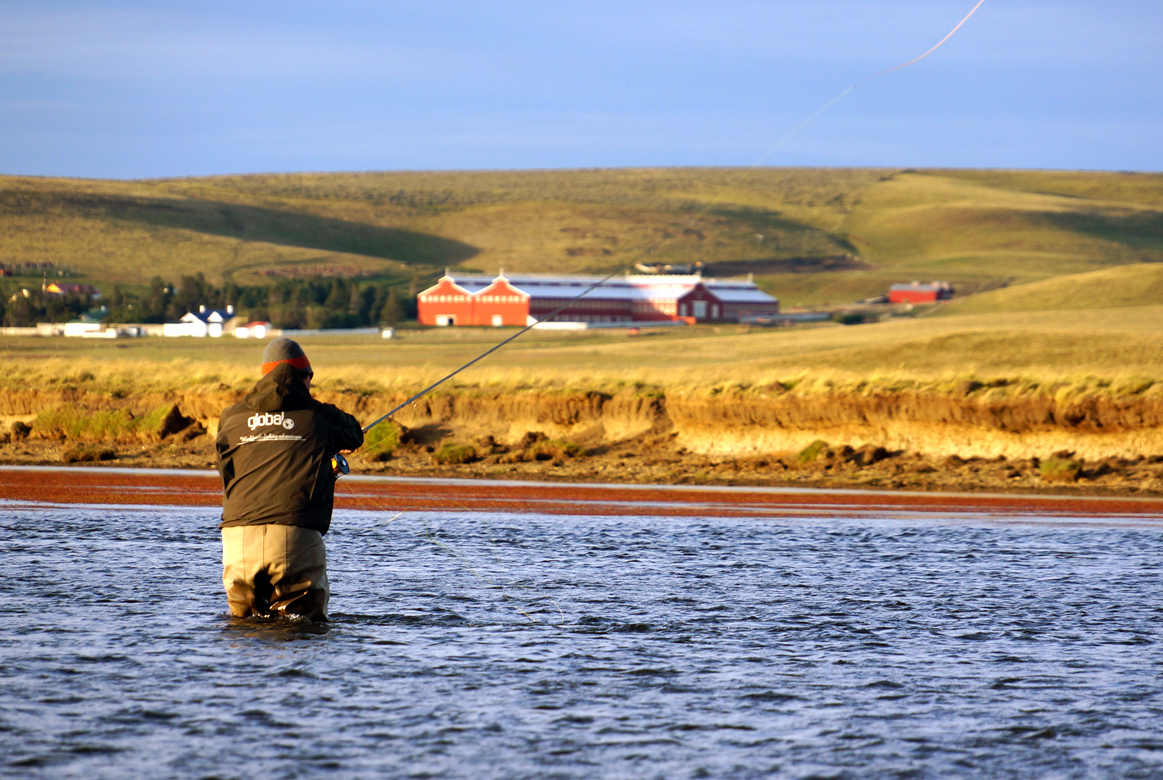